Brands often struggle when it comes to “brand messaging” and being part conversation. Social marketers will often keep their eyes on emerging news stories, with the Trending hashtag section on Twitter for example, but the challenge is to then work out how your brand fits into the conversation.

Sadly for someone at Homebase this morning, they didn’t quite think it through…

Following coverage on the Daily Mail, The Sun, Mashable to name just three outlets, I feel for the person who did make an ill-judged tweet. This example goes to show

Google Clamps Down On Review Freebies

Bestowing bloggers with free products or services to review has become a popular way to gain coverage of your offering. Brands have cheekily been prescribing the links bloggers should reference (omitting and nofollow) and bloggers have, in some cases, been naively doing as they’ve been asked and jeopardising their blog. Over the weekend, Google started issuing bloggers with notifications of unnatural outbound links if they had not been nofollowing links, where appropriate. The notification stated that “Google has applied a manual spam action to the affected portions of your site. Actions that affect your whole site are listed under Site-wide matches.”

What does this mean?

If you’re a business and have been working with bloggers, any link equity/page rank benefit to your website will have been wiped out and you may see a drop in rankings. Hopefully you’ve been working with bloggers who provide a relevant audience and traffic irrespective of “link value”. Now is the time to re-evaluate your online strategy and gain an advantage over your competitors who may also have been affected.

If you’re a blogger, pages or categories of your site may have dropped out of Google all together. There is a risk that Google turn up the dial in future algorithm updates and the penalty has a wider effect across your website. Take action and nofollow any links which have been influenced by money, products or services. Brands may attempt to exert pres$$ure to provide follow links, you need to protect your blog by sticking to the rules, creating great content and building readership which will provide better results for you and your brand partners.

Google went beyond their quality guidelines last month, to further clarify how bloggers can work with companies offering free products with this post highlighting these three tips:

Something businesses and bloggers alike need to keep in mind.

The Facebook Developer Conference F8 is here and following last year’s announcements of; Support of 360 Degree Videos, Embeddable Videos, 30M+ Apps Have Been Made Using Facebook’s Platform amongst other things.

Here’s what might be on the cards this year.

Facebook is upping the ante as they take on SnapChat and Periscope for personal live video broadcasting. Their recently updated mobile app included a dedicated hub for watching live streaming and recorded videos as well as investment with a raft of publishers to build content and capture video audience is testament to this. Afterall, who doesn’t want to see how many rubber bands it takes to explode a water melon?!

So what will F8 bring to the party? Likely engaging developers further with information on best practice, optimisation and production features. 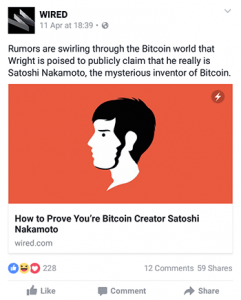 Facebook has been running Instant Articles with a select number of publishers (denoted by the lightening bolt on articles). Given their near instant loading, the user experience is much improved which will draw more publishers in looking to display their content natively.

Expect announcements around how the platform will evolve.

Facebook Messenger is used by over 900m people per month. As businesses look to engage with their customers on the platform our guess is that the bots are coming! Bots in chat applications are big news as the artificial intelligence becomes, well, more intelligent to ease the burden on customer service teams by answering queries in a human-like manner. There’s also rumours of businesses delivering content via Messenger which would offer a way for Facebook to monetise it.